All of my friends have decided to jump back into blogging, so I'll make the same effort and try to keep my blog updated. Key Word: Try.

My last post was Matt's 3rd birthday. wow.  I don't really have a lot of pictures because the last couple of months have been a whirlwind I never busted out my camera. All I have are cell phone pictures and I haven't gotten around to downloading those either.

So here goes: Beginning of June we decided to move back to El Paso. Sam got into nurse practitioner school at UTEP and we figured it would be easier to move back home for that time (a little less than 2 years) seeing as he would be in school a lot and couldn't work as much, plus having two little kids and no family around is stressful. I'll also admit that I was pushing to move back home because I missed my friends and family. Don't get me wrong I had a few great friends in San Antonio and I was finally getting to meet more people and things were right on the cusp of finally looking up, but then the opportunity to move back home presented itself and I just ran with it. Luckily, we had some friends back from our Travis AFB, CA days that were relocating to San Antonio and they were looking for a rental. Couldn't have been more perfect of a situation :)

The first week in June my parents arrived to help us pack, load up the Uhual and make the grueling 9hr drive back home. It was hard to leave our first home, but we knew we'd be returning after the schooling wrapped up...maybe. I will admit, I was sad and I miss our house so much. 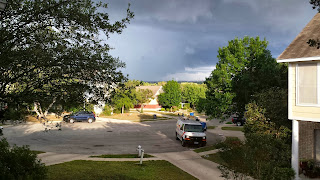 I miss this view from Sammy's bedroom window. 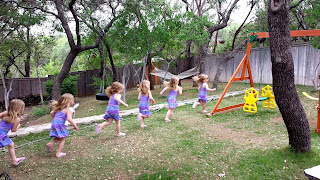 I miss this backyard. 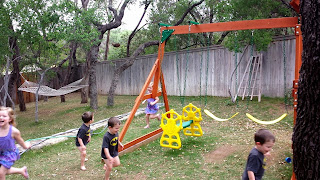 I miss all of the fun and adventures the kids would have out there. 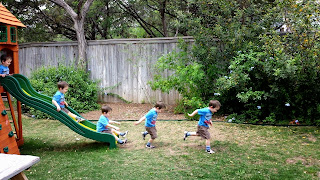 We lived my parents for a few months and we are so happy and thankful they took us in while we we figured out what to do next. We were debating renting or buying and since I wanted to (at the time) be back in El Paso permanently, I pushed for buying a place. I wanted something new and sam wanted something in an older, nicer neighborhood. So, of course we bought the older place and it has been a ton of work. It was built in 1962...and you can tell. 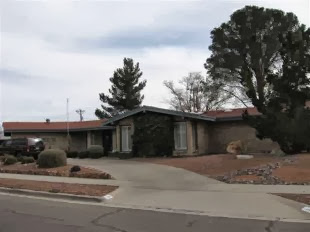 We closed on it at the end of July and immediately started ripping it apart. Sam was pulling out carpet when we noticed some wood rot inside the house from a leak. Sam had to spend an entire day pulling out plants and digging out a planter. Who builds a planter against a house anyway??!! 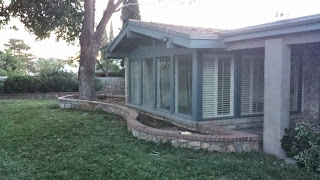 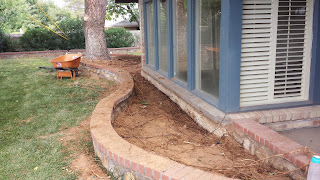 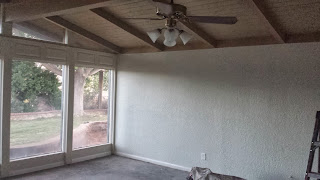 Right under the windows was where all the wood had to be replaced. Sam's dad redid it all for us and now it's as good as new.
Onto the next project: 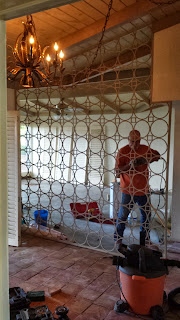 This sixties metal screen needed to be removed. Not only was it hideous, but Matt liked to scale it and stick his head out of the circles. No bueno.
Sam's dad cut that out too. 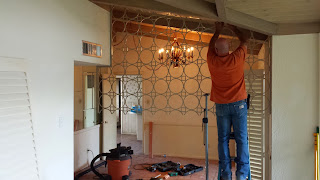 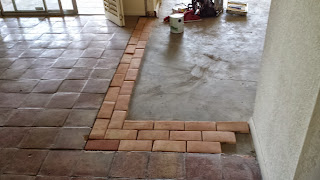 Sam laid some more salitillo tile to fill in the rut that was left by the screen. The finished product came out great, but I'm too lazy to go into the computer to find the picture. Plus, the kids are screaming at me, so I'm trying to wrap this up quickly.

Next project: demolish 2 of the 4 hallway closets and turn it into a mud room...Pinterest style. 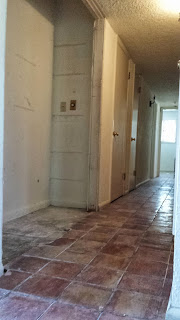 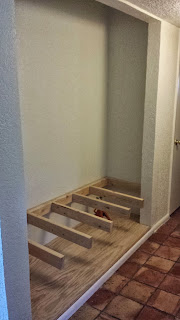 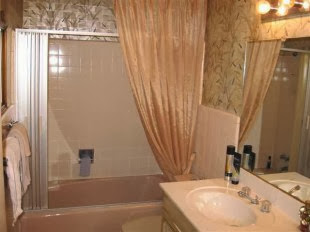 The current project is the main bathroom. Here is the before. Hideous. Just hideous.
Sam gutted is to the studs like the first week we owned the house. My dad helped him remove that fabulous pink tub, then it was time to start the remodel. My dad cut out a window for us and installed the new tub, plus did a ton of plumbing work. It is coming along. Again, I will post on it in detail later. 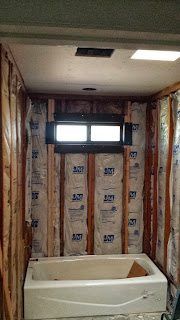 So, there you have it. We actually moved into the house at the end of August, but we have been living in a construction zone. Sammy started first grade at a new school and she loves it, I hate it, but that I've ranted enough about it to everyone and I don't feel like doing it again. I just wish she was back at her old school.
Sam is currently working full time as an ER nurse, going to school for his Masters in Nurse Education which he will complete this December. He is simultaneously taking classes for his Nurse Practitioner certification which will be completed next December. Oh and he also teaches a few nursing classes at the University. He's busy.
I just started substitute teaching, but I only do it a couple of days per week, when Sam's off. I don't have the heart or the money to put him in daycare right now. Needless to say, Sam and I rarely see each other. 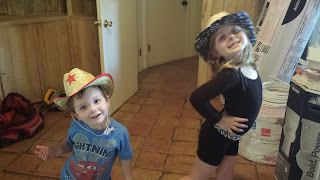 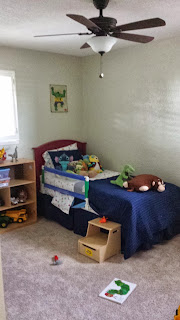 Random picture of Matt's room all  completed. Paint, new carpet and a new ceiling fan. Once I can muster enough organizational energy, I will post all of the house pictures too and I'll try to include as many before and afters as possible. 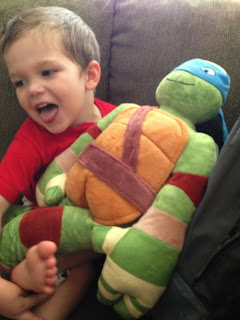 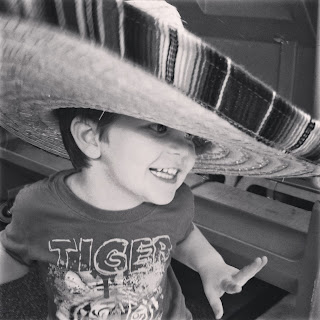