I had a dr's appointment on Monday and he said we can start talking about scheduling a date for the c section! So next Monday we should have a birth date. Yay for the baby finally being here, but not yay for the c section :( I asked if he could deliver the baby at 37 weeks, but he said 38 weeks was better. So I have 3 more weeks and I swear this kid is doubling in size every day.

I still haven't decided on a name...I guess I need to get on top of that.

Fish update: we had to flush Dorothy :( He was floating at the top of the tank for a few days. Samantha didn't seem too torn up by it, and I promptly cleaned and sanitized the tank and put it away. I did research on the internet and determined that the fish had parasites called anchor worms. They said you could lay the fish on a damp towel and use tweezers to pull off the worms....barf! Plus, they needed antibiotics. Once they get infected with these worms, they develop a condition called dropsy and they cannot swim down any more. After all the drama we decided - No more fish for us! I think a dog is easier to take care of. On a related note: Samantha got a balloon the other night from a restuaraunt and it deflated the next day. I made the mistake of telling her the balloon died and she looked up at me and said: "Please don't flush it down the toilet" I almost cried laughing because she was so serious.
Posted by Michelle at 1:17 PM 1 comment:

One of the fish we got Samantha a few weeks ago died :( They had been acting weird for a week or so. They have just been hanging out at the top of the tank in one corner and they haven't been eating. The blue and orange one (Dorothy) is still hanging in there, but I don't think it's going to last long. I guess we're not "fish" people.

Sammy didn't really understand what happened, so I guess that's good. She hasn't been too interested in them lately anyway.

In other news: I'll be 34 weeks tomorrow!! I have had a very rough last couple of days with contractions and not beoing able to sleep, but hopefully I'll have the baby soon! I'm scared to death of the c section and it's making me very anxious. The anxiety is causing me stress, which in turns causes contractions. It's a vicious cycle.
Posted by Michelle at 12:33 PM 1 comment:

New Fish and a Funny Song

We have been having problems keeping Samantha in her own bed at night. We always have to lay in her bed until she falls asleep. Then about 3am she wakes up and wants more apple juice and she wants to get in bed with us. I saw a special on Good Morning America a few weeks ago that had steps and tips for getting your kid to sleep in their own bed, by themselves. Tip #1: Get your child a small pet like a hamster or fish. Hamsters stink, so we opted for fish.

We went to Petland with every intention of spending about $20 for a goldfish, a bowl, and some rocks. We were told by the guy that worked there that goldfish were kinda dirty and the bowl needs to be cleaned often. Plus, I was really grossed out about having to put the fish in a cup for cleanings. Long story short: We ended spending about $100 on a fish tank, rocks, vacuum, thermometer, water conditioner, decorative backsplash, and two guppies that cost $3.65 each.

Sammy doesn't seem very interested in them, so great. Our plan has failed. 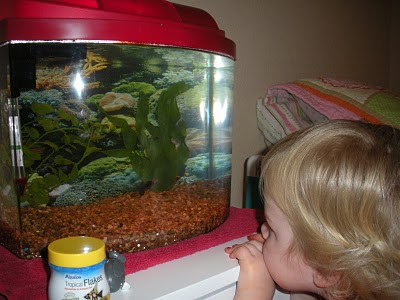 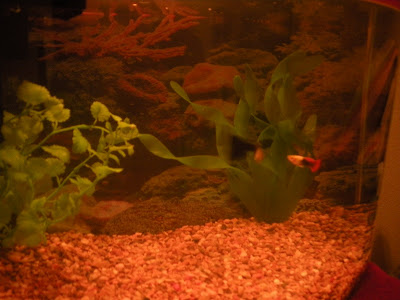 There's Dorothy, not sure where Mickey is.


Here she is singing a song she learned in daycare a while back. She developed a renewed interest in it when she learned how to make the "pop" sound with her finger in her mouth. Here are the lyrics:

"Two fat sausages sitting in a pan
One went "pop" and the other went BAM!"
Posted by Michelle at 7:14 PM 2 comments: 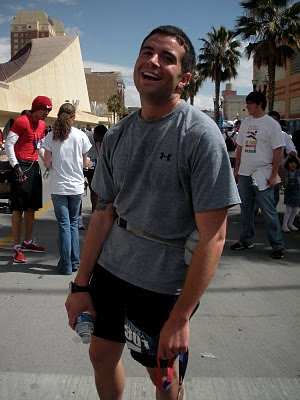 Sam ran the 26 mile marathon today in El Paso. These pictures are in reverse...the finish line is the first two and the bottom two were taken at 18 miles and 20 miles. It was very exciting to see him finish. Samantha got to high-5 him two times during the race. We are very proud of him.

I probably should not have been standing out there, but I didn't want to miss it. 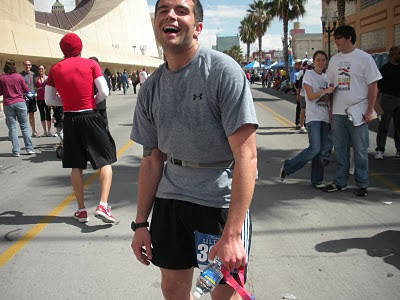 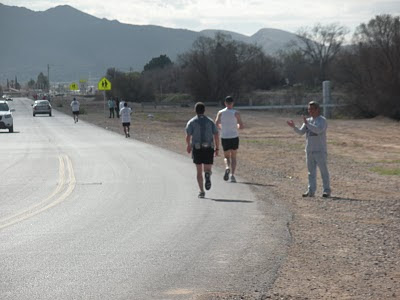 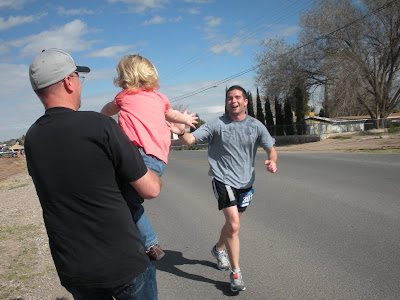 I think he is about 20 miles into it in this video.

And here is at the finish.

He is set to run a 50 mile ultra marathon near Albuquerque this October.
Posted by Michelle at 12:15 PM 2 comments:

Sammy at the Park 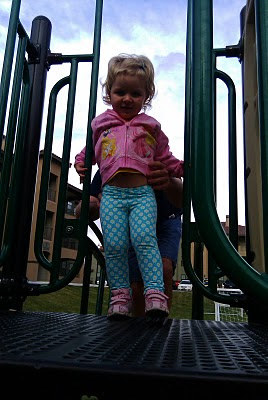 This is at the park thing at our apartments. My mom and Dad took her and they played soccer with her. The video is awesome and it will be on its way soon....as soon as I figure out to rotate it. 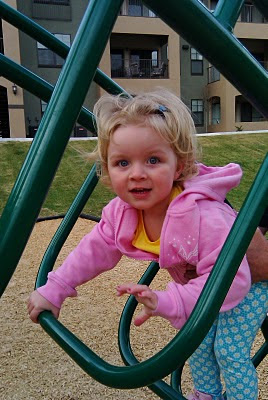 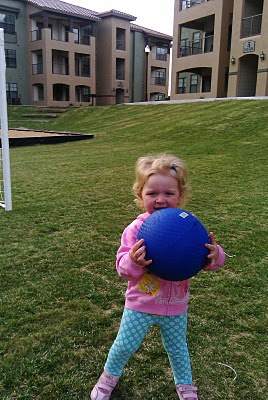 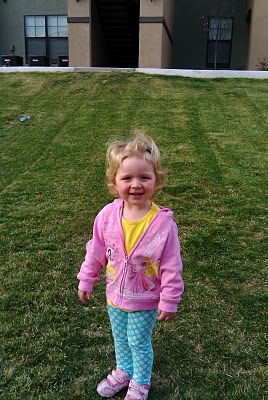